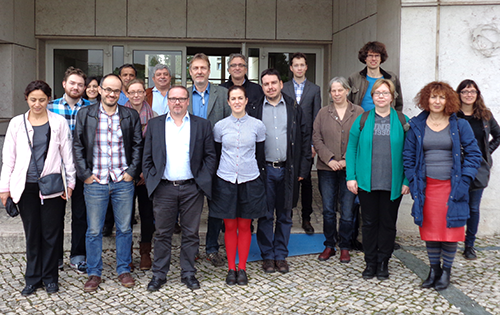 The regular autumn 2014 meeting of the RESCuE-team was held in Lisbon/Portugal from November 12th to 14th at the Instituto Universitário de Lisboa (ISCTE-IUL). Main issues were state and progress of the current fieldwork as well as first analytical impressions on socio-economic practices, cultural practices and longitudinal developments in the resilient households under study. This provided valuable insight into the considerable heterogeneity of socioeconomic practices developed by families and households to support their living in times of crisis. Especially when there is a lack of sustainably paid labour, resilient families turn to mixtures of culturally embedded but sometimes residual practices to save and substitute monetary income, including foraging, gardening and extended housework, used goods markets, mutual support and small jobs, just to name a few. The Scientific Advisory Board present at the meeting provided substantial feedback on the aims, structure, and methodological risk assessment of the RESCuE project, which the team took up into discussion with additional input from the representative of the European Commission’s DG Research. The next meeting was decided to be held in Madrid in early 2015 with a focus on fieldwork completion and visual analysis.